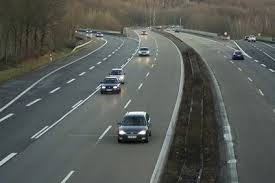 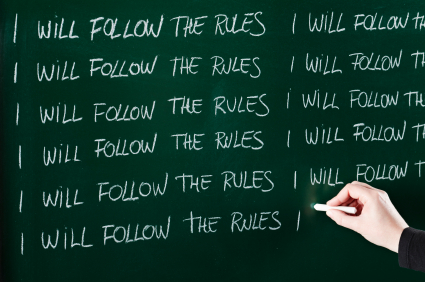 I have a vague recollection of having to write these words on the chalkboard back in third grade or so. Definitely not my finest hour, although I maintain my plea of innocence even after all these years.

I have since learned that there are rules one should not break. The consequences can be dire if one oversteps the boundaries set out by the various rule makers of the world. Like speeding through a residential zone = $165 ticket to be paid in full within 10 days or the cops will show up at your door to haul you off to the slammer. At least that’s what they want you to think. This is the kind of rule that demands obedience. Or else. The or else is usually bad enough to make the rule a little easier to follow.

Then there are the suggested rules. These are guidelines that are a good idea to follow simply because other people have gone before you and figured things out so you don’t have to reinvent the wheel. Most social skills would fall into this category, I think. And procedures for making things, building things, handling things. Consequences for doing it your own way instead could be a hard lesson.

There are also rules for developing the creative process. I’ve made my own list, taking bits and pieces from different “experts” on the subject, and these work for me.

1. Stop saying you’re not creative. God is a creative genius and He made you in His image. Enough said.

2. Stop fearing failure. Everybody fails at something. Just learn from it and move on.

3. Stop sitting on your behind and waiting for the right time instead of doing whatever it is you need to do.

4. Stop discounting your own ideas. Write them down, no matter how far-fetched they seem. Keep referring back to your list. I’ve developed some terrific story lines from ideas I wrote in my little book years ago.

5. Stop thinking there is only one way to do something. There is always a more efficient, faster, easier, fun, interesting, creative way.

6. Stop blaming everyone else. You may have had a terrible childhood or a poor education or got fired from your job. Now it’s time to make a decision to put the past behind and take responsibility for your future.