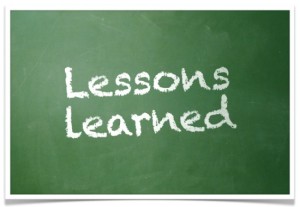 I remember once spending a good chunk of a perfectly good weekend trying to get an operating system installed on a freebie laptop.

I am usually pretty good at computer stuff and thought this would be easy. Wrong. Nothing worked and I became frustrated beyond belief. I wanted to throw the whole thing out the window and forget about it. But . . . I reminded myself that the computer didn’t cost me a cent and if I had to take it in to a PC repair shop to get the deed done, then so be it.

After I calmed down, I decided to give it one more try and Googled “how do I reformat my hard drive and install Windows XP”. Lo and behold, the very first website that came up was a step by step instruction on how to do this, and within an hour the good old laptop was back in operation. Amazing what happens when one follows instructions.

Is there a lesson to be learned in all of this? Of course there is. And I’m going to get spiritual here because it’s a pretty awesome lesson.

I don’t know about you, but I tend to be one of those people who likes to do everything myself – you know the type. Kind of bossy. Know-it-all. I need to know it’s done right. Right? Doesn’t matter that lots of other people could do a better job. Anyway . . . this tiny little character flaw often spills over into my Christian life. I neglect to follow the instructions in God’s Word and end up getting frustrated and impatient, wondering what went wrong. Like my way is better than God’s??? But when I get the step by step instructions set out so clearly bythe Father in His Word, I am back up and running in no time.

Yeah, there are consequences to going my own way, just as there were consequences resulting from trying to fix the computer without the instructions. And those consequences are usually unpleasant. God is loving and forgiving, however, and He makes a way where there is no way. Things may not be as perfect as they would have been had I followed His direction in the first place, but I’ve hopefully learned something in the process and I am stronger at the end of it.

So there’s the Lesson.