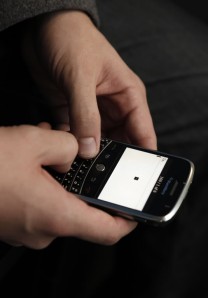 During our recent road trip, the convenience of being able to text with family at home and at our destination was pretty cool. Not that we hadn’t already been doing this for several years, but this time it was – um – interesting.

It was 10:00 pm and we were approximately 200 miles from our destination. We were tired, my husband, sister and I, and we knew those last hours would be the hardest of the trip. Kelly, my sister, had just settled down to sleep in the back seat when she got a text from our cousin, to whose home we were headed. Jacquie was wondering what she should do about Kelly’s two grown kids who had arrived at her place ahead of us. Apparently the two had closed themselves into their assigned bedroom and refused to come out. Then Kelly began receiving texts from her kids. They were feeling awkward at our cousin’s home, not knowing her all that well, and they didn’t want to make the effort to get to know her. Suddenly I got a text from another cousin who was also staying there. The cousins were frustrated with the kids and the kids were displaying some very immature behavior.

This six-way texting went on for about two hours. Kelly was furious in the back seat, trying to decide what manner of punishment she would administer to her children, ages 19 and 21. She was overcome with embarrassment that they would behave this way with our cousins. I was so confused, because I know these kids and this was totally out of character for them. My husband was ready to lay the smack down.

We made a pit stop about an hour or so away from our cousin’s house and it slowly became evident that something about this whole thing was suspicious. I told Kelly that it was starting to sound like the four who were waiting for us just may be in cahoots to pull off a really crazy practical joke. Kelly found it hard to believe. I didn’t. I know my cousins. And I know my niece and nephew.

We soon found out that the four of them were sitting around a table with their cell phones, firing off text messages in very quick succession while they discussed their every move.

We all had a very good laugh. And it made the last leg of our journey fly by.

Kelly has calmed down now.

2 responses to “The Texting Matter”