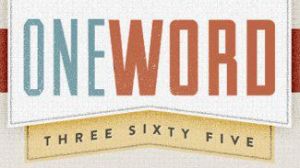 Have you heard about the “One Word” New Year’s resolution thing? Click on the image above to go to the site.

The whole idea behind this concept is to trash the resolution and focus on just one word – a word that becomes your own personal creed, so to speak, for 2012. I like this for many reasons, largely because I have a history of not keeping any kind of New Year’s resolution past about January 3rd. At least I think I made it that far once.

You may not be able to get through your laundry list of resolutions, but you can focus on one word. Or in my case, two words.

This is a shortened version of: Listen to God. Do what He says.

I am really good at talking, but not so good at listening. And when it comes to the doing part of what I was supposed to be listening to – well – let’s put the past behind and move forward, shall we? This is a new year.

2012 is just over a week old and already I can see that Listen and Do will be a learning process. I have a lifetime of bad habits to break where this is concerned, and I think my biggest hurdle is to be still long enough for God to say what He wants to say. I want to be attentive. I want to hear what He is saying to me. And I want to act on that, whether it be something He has spoken to me in His Word, or during my prayer time, or through someone else.

So even though my One Word is actually two, I think I can do this.

Tagged as do, God, listen, One Word, prayer